Bangalore centre of Bharatiya Vidya Bhavan enjoys as enviable reputation in the service of arts, education and culture as its present organisation in Mumbai. As is well-known, the Bhavan is brain child of visionary like Dr. K.M. Munshi. Founded in 1938 it had its objective of promoting and propagating tested Indian Ideals.
Karnataka as the distinction of nurturing one of the earliest such Kendras. Thanks to the motivation of personalities like Shri. Jaya Chamaraja Wodayar, the erstwhile Maharaja of Mysore, Shri. S. Nijalingappa, the Chief Minister, Dr. R.R. Diwakar, Editor of the popular Kannada daily Samyuktha Karnataka, and Joint Editor of the Bhavan's Book University series, and the good offices of Shri. G. Narayana, the Mayor, a Plot on Race Course road was acquired. Shri. Sundarama Shetty of Vijaya Bank volunteered to help raise a building for the centre on lease. The foundation stone for the building was laid by Shri. Lal Bahadur Shastri, then Prime Minister of India in the year 1965 and the building was inaugurated by Dr. V.V. Giri, President of India on 16 November 1969. With dignitaries like Shri. Jaya Chamaraja Wodayar (patron), Shri. Nijalingappa (Chairman) and Dr. R.R. Diwakar (Vice Chairman) at the helm, it did not take long for the Kendra to start functioning.
The administration initially in the hands of influential persons like Prof. M.P.L Shastry, Justice Gopi Vallabha Iyengar, Shri. K.P. Krishnamurthy, Advertising Manager of Deccan Herald and later Shri. S.R. Venkatachalam, started courses in Journalism and Public Relations and organising lectures and demonstrations on topics of varied interest, interspersed with music and dance recitals. All these activities started attracting the literati and connoisseurs of music and dance. This increased the secretarial responsibilities of the Kendra.

The Jyothi Smruthi Music Concert was held on June 25, 2022 at Bharatiya Vidya Bhavan, Bengaluru. The programme featured a Carnatic classical concert by Vidwan Pavan Rangachar on vocals, Vidwan Aniruddha Bharadwaj on violin and Vidwan Anirudh S Bhat on the mridangam. The artists were felicitated by Shri H. N. Suresh, who applauded their performance and thanked Jyothi Charitable Trust for the deep bond that they share with Bhavan Bengaluru. 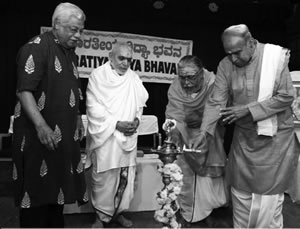 Bharatiya Vidya Bhavan, Bengaluru and Jyothi Charitable Trust, Bengaluru jointly conferred the Vyasa Jyothi Award 2022
on eminent scholar Mahamahopadhyaya Vidwan G. Mahabaleshwar Bhatt on
July 17, 2022.
Born in 1948, Vidwan G. Mahabaleshwar Bhatt served as a Professor in Vyakarana Shastra for 34 years in Shri Chamarajendra Sanskrit College. He has been a recipient of several awards such as Shastra Nidhi from Avadhoota Dattapeetham, Vyakarana Vichakshana from Shri Swarnavalli Matha and the prestigious Rashtrapathi Puraskar and many others.

In his acceptance speech, Vidwan Shri Rajagopal Sharma expounded on the importance of the Gurukula system and the prominence it attached to a Guru. He appreciated the relentless efforts of Jyothi Charitable Trust in identifying scholars engaged in dispersing the knowledge of our ancient texts. He concluded his address with a ‘Ghana’, one of the most complex ways of reciting the Vedas.
The event concluded with a Shanti Mantra. 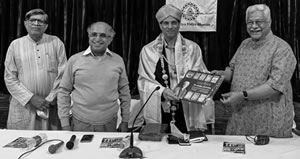 Thanks to collaboration between Bharatiya Vidya Bhavan, Bengaluru and the Consulate General of Israel to South India, cinephiles of the city can look forward to an Israeli film fiesta.
On January 21, 2021 the Kendra received his Excellency, Consul General Jonathan Zadka, Consulate General of Israel to South India who graced Bhavan's Film Society with his august presence. Mr. Zadka was accompanied by Ms Aditi Joshi, Head of Press, Consulate General of Israel to South India. They were welcomed by Shri K. G. Raghavan, Chairman and Shri H. N. Suresh, Director, Bhavan, Bengaluru.
Mr. Zadka expressed his delight at the naissance of Bhavan's Film Society, and elucidated on the importance of films as not only a source of entertainment but also as a platform to educate ourselves in the art and science of film-making. Erasing borders to indulge in cine experience from across the globe will introduce film lovers to new cultures, ideas and outlooks. He has promised to share riveting Israeli films for the benefit of Bhavan's Film Society members. 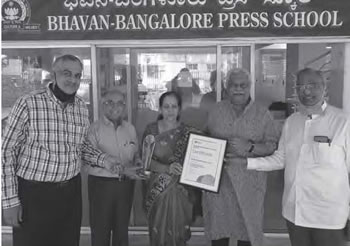 Bhavan Bangalore Press School has been awarded the prestigious International Dimension School Award. The award was given by British Council for a period of
three years from 2020-2023. The prize distribution function was held on an online platform. The British Council provides a globalised platform for the students to learn. It adds an international dimension to their learning. The whole project provided an opportunity for students and teachers to explore and innovate. It was a learning experience for both the students and teachers. Seven projects were taken up: Women empowerment, Monuments, Indigenous sports, Festivals, Music-makes-you-go round-the-world; Language learning-is-fun, and Jungle book. Almost all the students of the school were involved in one or the other of the projects. Some of the projects were collaborative. The students got an opportunity to collaborate with students of Nepal, US, China etc.

New Technology, Need of the Hour 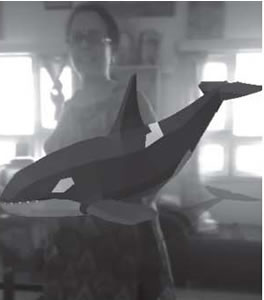 With the Covid-19 virus present around us, none are sure when the schools will reopen. To prevent any learning gaps for students, teachers have become tech savvy. They have learnt to make power point presentations, videos, and to take online classes, incorporating the special features of AR (Augmented Reality app).
Competitions were conducted on Environment Day and Yoga Day. On Environment Day, the students were asked to make posters, paintings or plant plants. On Yoga Day, the students were asked to send videos of them doing yoga asanas with their families. There were prizes for the best entries.