The Guntur Kendra was started in 1969. 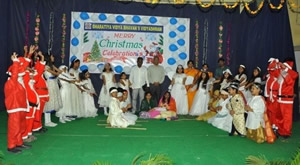 Christmas was celebrated with galore and geity in the premises of Bhavan's Vidyashram. The birth of Jesus Christ was enacted by the children and the presence of Santa Claus made the children happy with enthusiasm. 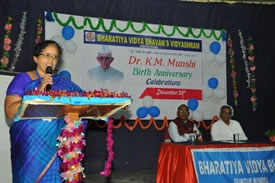 Bhavan's Guntur has celebrated its Founder Shri K.M.Munshiji's 131st Birth Anniversary. Sree Paravastu Naga Sai Suri, IIS, Publicity Officer, Ministry Of Information and Broadcating, is the Chief Guest of the day. The programme was started with the invocation of God followed by the floral tributes to Shri K.M.Munshi. An AV on Shri K.M.Munshi was played for the children. The Chief Guest hailed that Shri K.M.Munshi is an ardent advocate of our Indian Culture. Bhavan's held its head high in the upliftment of the Indian culture. Principal Sree N.V.S. Santha Rao concluded the session with his closing remarks.
Teachers, children and print and electronic media have participated in the event and made it a success. 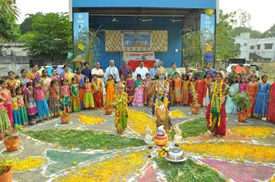 Makara Sankrati, the harvest festival celebrated throughout India by different names was celebrated with festivity in Bhavan's, Guntur. Children depicted the different forms of the festival which is celebrated for three days, the first day being Bhogi, where bonfires are lit to drive away the cold, the second day, being the pongal where cattle are worshiped for their hard work in the fields and rice which comes from the new harvest is cooked with milk and jaggery and is offered to the sun god, and the third day was depicted by the students in the form of fortune tellers, haridas whom the Hindus consider as the avatar of Vishnu. All these made the premises an area where the Pongal came alive before 15 days. Rangoli competitions were held and prizes were distributed to the winners by the chief guest. 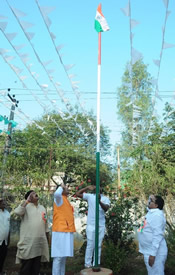 Republic Day was celebrated at Bhavan's Vidyashram. Chief Guest of the day was Mr. V. V. Ravi, active member of Red Cross Society. He hoisted the flag and spoke about the importance of the constitution. Secretary Mr. Rama Chandra Raju Garu, Treasurer Mr. Majetti Prasad Garu, Mr. N.V.S. Santhrao, principal of BVB, Guntur, Staff and the students were present on the occasion.