The Thiruvananthapuram Kendra of Bharatiya Vidya Bhavan, commenced functioning in February 1986, is one of the major Kendras of Bharatiya Vidya Bhavan. It runs the following institutions:
1. Bhavan’s Senior Secondary School, Kodunganoor.
2. Bhavan’s Vivekananda Vidya Mandir Senior Secondary School, Manvila.
3. Bhavan’s Kulapati K.M. Munshi Memorial Vidya Mandir, Poojappura,
4. Bhavan’s College of Communication and Management (a constituent of Rajendra Prasad Institute of Communication and Management, Mumabi) Thiruvananthapuram.
The Kendra in collaboration with Infosys Foundation and Bangalore Kendra Organizes Cultural Outreach programme for supporting rural artists and to revive extinct art forms of Kerala. The Kendra is the nodal centre for implementing the programs since 2012.
As a unique venture the Kendra has been conducting “News for Use”, a general awareness test for Teachers to promote News paper reading habits among teachers and then pass on such information on a regular basis to students. All Kerala Bhavan’s Tests for Bhavan’s Schools have been conducted successfully for 2 years and our attempt to have an all India Test could not succeed due to pandemic.
An ambitious construction activity for providing an Auditorium (1000 capacity) and a Nursery block at BVB Manvila is progressing well. We have a social responsibility fund which supports children from financially poor families.

Bhavan’s K.M.Munshi Memorial Vidya Mandir, Bharatiya Vidya Bhavan, Thiruvananthapuram Kendra organised a free Dental and Eye care camp for the students to commemorate Gandhi Jayanthi. The Camp was held at the School Campus on October 1, 2022 in collaboration with Indian Dental Association, Sreenethra Eye Care Hospital and Lions Club of Trivandrum Rajadhani. Shri.K.S Premachandra Kurup IAS (Retd.), Chairman of the Kendra inaugurated the function in the presence of Prof. C. Mohanakumar, Hon. Secretary and Educational Advisor. An awareness class by Pedodontist Dr. Manju Renjith on the topic 'Early Dental Care and Oral Hygiene' was arranged for the parents and neighbourhood on the same day. Snacks were also distributed to the children. 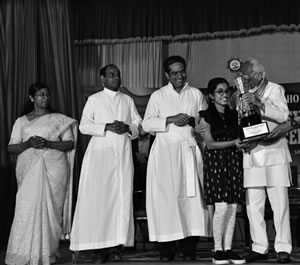 Kumari Gauri M. of Bharatiya Vidya Bhavan Higher Secondary School, Kodunganoor, Thiruvananthapuram, topper in CBSE Class 12 Board Examination at the national level was given the Academic Excellence Award by the Honorable Governor of Kerala Shri Arif Mohammad Khan in a ceremony held at South Zone Sahodaya Complex, Loyola School, Thiruvananthapuram. She scored 497 marks out of 500. 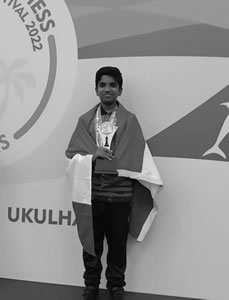 Master Gautham Krishna, a student of Bhavan's Higher Secondary School, Vattiyoorkavu, Thiruvanan- thapuram, was crowned champion in the under-12 category in Western Asian Youth Chess Championship held in Maldives. He also won the championship in the Rapid format in the U-12 category. On the final day of the classical event, Gautham was leading the fray with a clear one point and was almost confirmed winner of the championship with a round to spare. Gautham displayed sheer audacity to win his last round game and the championship by scoring 8.5 points out of 9 rounds. In the process, he also earned the norm for FIDE Master Title (the third-highest title a player can achieve). The title will be granted by FIDE once he attains a FIDE ELO rating
of 2100. 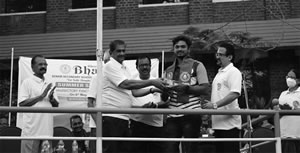 The Summer Camp 2021–2022 organised by Bharatiya Vidya Bhavan, Thiruvananthapuram Kendra was held from April 3 to May 6 under the leadership of Sri S. K. Nair, Vice-Chairman and Former Secretary of BCCI. More than 200 students enthusiastically participated. They were given meticulous practice sessions by seven qualified coaches in football, basketball, athletics, skating and cricket. A committee including the principal, camp director, camp coordinators, teachers, parents and school staff nurse was formed to monitor the activities of the camp. The main highlight of the month-long camp was the involvement of parents.
Motivational sessions were conducted for the students periodically by eminent sports personalities like Miss Sreekala, Indian basketball player, Shri Jose Kurisinkal, former international cricket umpire, Shri V.P. Shaji, former Indian football player and Shri Ramachandran Nair, senior coach.
A campfire was held before the conclusion of the summer camp where teachers, students and parents relaxed and had a stress-free time. The camp ended with a glittering function during which national chess champion (U–12) Master Gautam Krishna and Kum. Archa P. (silver medalist in skating) were felicitated. 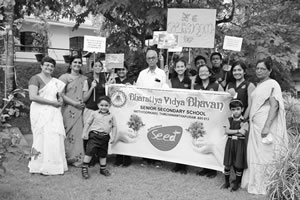 World Environment Day was celebrated in the two Higher Secondary Schools under Bharatiya Vidya Bhavan, Thiruvananthapuram Kendra.
Activities to preserve the school environment were initiated by the members of the Mathrubhumi SEED (Student Empowerment for Environment Development) Club of Bhavan’s School at Manvila on June 6.
Dr. B. Santhosh, Principal Scientist, Central Marine Fisheries Research Institute flagged off the year-long celebrations by planting a sapling in the school premises. He enlightened the children on the immediate necessity of preserving the environment and Mother Earth.
Many programmes including a speech, skit, poem recital and group songs were put up by the children. The celebrations came to an end with everyone pledging to take the initiative of saving the environment and doing their bit for a cleaner and greener Mother Earth.
Bhavan’s School at Vattiyoorkavu observed World Environment Day by embracing a part of nature itself. The Nature Club of the school in collaboration with Mathrubhumi ‘Seed’ created a butterfly sanctuary in the school campus. The sanctuary was inaugurated by Dr. V. Unnikrishnan Nayar, Vice Chairman of the Kendra by presenting tree saplings to NCC cadets of the school. The venture was implemented to mould a future generation which lives in harmony with nature as well as to create awareness among the young hearts regarding its protection. Teachers and students enthusiastically participated in the programme.