The Kendra was started in the year 1992. The school was started in a rented house. Now we have classes from KG to X Standard. Almost all the classes have two divisions.
From this academic year onwards we propose to start classes for yoga, dance, art and karate. Apart from this in academic side we propose to give much importance to coding, and special emphasis in bringing out the talents of the students, moulding their character, giving special focus on Bharatiya culture. 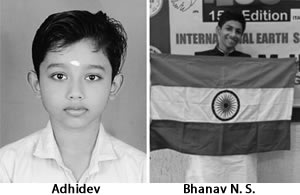 At the International Earth Science Olympiad 2022, a team of Indian school students won four gold, four silver and two bronze medals.  The Olympiad was held in Aosta Valley in Italy.
1. Bhanav N. S., a Class 9 student of Bhavan’s Vikas Vidyalaya, Nadakkavu was the first student to represent Kerala, youngest of the team and the team leader.  Eight students from various parts of the country participated in the Olympiad and competed with two hundred students from 38 countries.
This programme was funded by the Ministry of Earth Sciences and organised by the Geological Society of India, Bengaluru, as an outreach initiative for school students.
2. Adhidev C, Class 3 student of Bhavan’s Vikas Vidyalaya, Nadakkavu has got a gold medal and appreciation certificate from India Book of Records (Extraordinary feats... Extraordinary people) by solving four Rubik’s cubes including 3 x 3 and Pyraminx blindfolded in 30 seconds.