Bhavans Thrissur Kendra was established on 4th November 1978 under the visionary leadership of Shri. P.B. Nair.
Bharatiya Vidya Bhavan probably left a lasting impression on Shri PB Nair during his sojourn as the Regional Director of the Press Trust of India (PTI), Bombay. During his tenure afterwards as one of the Directors of Dhanalakshmi Bank having registered office in Thrissur, Shri. P.B. Nair was able to bring like- minded luminaries into realizing the dream of starting this great institution.
With stalwarts at the helm, the Bhavans Thrissur Kendra made a promising beginning with Shri NS Mahadevan (Then Chairman of Dhanalakshmi Bank) as the Chairman and Shri PB Nair, himself as the Secretary. The three Vice-chairmen were Shri Chithran Namboodiripad, Dr SK Pisharody, and Shri TAG Menon. Shri Pujara was the treasurer. Dr KF Manavalan, Dentist, KPB Nair and Shri Pankajakshan, Chartered accountant, were the committee members. It was in 1979 that the Kendra announced the setting up of an educational institution affiliated to the Central Board of Secondary Education, New Delhi.

Starting in a two-room tenement on Shornur Road, Patturaikkal, with 16 students under the guidance of Smt Ammini Brahmani Amma (Retired Deputy Director of Education, Thrissur) moving to Natananiketan, a hall situated in Shornur Road in 1980, and to a larger building owned by Shri PB Nair in 1982, the progress was fast and steady.
1983- Smt Annapurni Shastri, wife of the Deputy Commissioner of Income tax in Thrissur joined as the first Principal.
1983 also saw the setting up of the Parent Teacher Association with Shri KS Unni as its President.
The large-heartedness of Swami Mridanandaji Maharaj, the then President of the Sri Ramakrishna Matt, who with the approval from Srimat Ranganandaji Maharaj, , the then President of Sri Ramakrishna Matt and world wide provided Bhavans the Matt's large house on Korappath Lane, off Palace Road where today stands the well-known Bhavans Town School with the gigantic structure of the Sarva Dharma Maithri Pratishtan.
Later, a five-acre plot 7 kms east of Thrissur was bought. This is where Bharatiya Vidya Bhavan's Vidya Mandir, Poochatty made a start. Ever since, it has surged ahead and continues to do so with the blessings of God Almighty and the guidance and support of its various stakeholders.
In response to increasing demand for admission to Bhavan’s Schools known for quality education, Bharatiya Vidya Bhavan Thrissur started its second CBSE School, Kualpati Munshi Bhavan’s Vidya Mandir at Pottore, Kolazhy Panchayat, Thrissur, named after the illustrious founder of Bharatiya Vidya Bhavan, Kulapati K.M. Munshi in June 2004.
What we see today is the fruit of the relentless and selfless efforts of innumerable individuals. 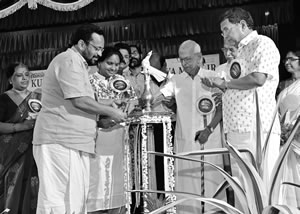 A multipurpose auditorium has been constructed in the Kulapati Munshi Bhavan’s Vidya Mandir, Pottore, Thrissur, at a cost of Rs.3.25 crores. This auditorium was built to commemorate the birth centenary of Bhavan’s Thrissur Kendra’s founder Vice-Chairman Sri. P. Chithran Nambudiripad, a visionary academician, writer and social activist. As a mark of respect to his valued services to Bhavan’s Thrissur Kendra from its very inception, the auditorium was named ‘P. Chithran Nambudiripad Sathabdi Mandiram’. The inauguration was conducted by the Kerala State Revenue Minister Sri. K. Rajan on May 29, 2022 in the presence of Smt. Remya Haridas M.P., and office bearers of Bhavan’s Thrissur Kendra. Other Bhavan’s Kendras in Kerala participated in the function.

Land Handed over to Corporation 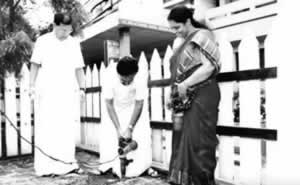 As requested by the Thrissur Municipal Corporation, Bharatiya Vidya Bhavan released an extent of 0.03 cents of their land at Sarva Dharma Maitri Complex at Vadakkechira Road to the Thrissur Corporation. This was done with the approval of Bhavan's Central Office, Mumbai with a view to lessen the heavy traffic congestion on the road, east of the SDMP Complex.
The handing-over ceremony was held on December 2 in the presence of the office bearers of Thrissur Kendra and the Honourable Mayor of Thrissur, Sri. M. K. Varghese.