Bharatiya Vidya Bhavan Bhubaneswar Kendra, founded in 1969 is a philanthropic initiative to promote education, art and culture. It is a value-based organization continuously striving to contribute towards the educational, intellectual and socio-cultural upliftment of the people of the State of Odisha.

After the sudden demise of Maj Gen B. K. Mahapatra, Chairman of the Kendra on February 15, 2021, the President of Bharatiya Vidya Bhavan, Shri Surendralalji Mehta was pleased to appoint Lt Gen J. K. Mohanty as Chairman of Bharatiya Vidya Bhavan, Bhubaneswar Kendra w.e.f 1st July 2021.
Lt Gen J. K. Mohanty is a product of Sainik School, Bhubaneswar and was commissioned in the Dogra Regiment in June 1969. Lt Gen J. K. Mohanty had wide array of Regimental and Staff appointments before he was appointed as General officer Commanding in Chief of the Simla based Army Training Command which is responsible for co-ordination of various factors of Professional and Technical Training in the Army. He is colonel of Dogra Regiment.
For his excellence and dedicated service rendered, Lt Gen J. K. Mohanty was awarded with various honours like PVSM (Param-Vishisht Seva Medal), UYSM (Uttam Yudh Seva Medal), SM (Sena Medal) and VSM (Vishisht Seva Medal).
Looking forward to the growth of Bharatiya Vidya Bhavan, Bhubaneswar Kendra during his tenure as Chairman.

150 Years of the Mahatma 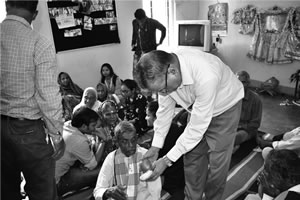 Keeping Gandhiji as a role model, students from Bhavan's Centre for Communication & Management (BCCM) in Unit-III, Bhubaneswar started the 'Clean India - Green India' campaign.
The students of the institute launched a three week-long sanitation campaign in their institute and neighbourhood. All students and staff did Shramdaan for physical cleaning of the streets, roads, school, college, hospital and other public places.
A structured and comprehensive programme was drawn out for conducting several intellectual discussions on the cleanliness of Body, Mind and Intellect for a healthy and rewarding personal and professional life. This initiative engulfed different cross-section of society including children, youth, senior citizens, women, people of poor economic background and differently-abled persons.
The celebration of 150 years of the Mahatma was held in a meaningful manner by the students of Bhavan's Centre of Communication and Management Bhubaneswar, inspired by Mahatmas saying, - The best way to find yourself is to lose yourself in the service of others'.