The Visakha Kendra was started in 1976.

Bhavan’s Public School, Visakhapatnam, in collaboration with LEAD, took the initiative to provide a free virtual summer camp to all the students of the school.
The camp was organised online via the LEAD student app for a span of six weeks, i.e., from May 3, 2022 to June 13, 2022.
This programme was designed for three days in a week with sessions entitled Tinkering Tuesday, Funday Friday and Story Sunday.
Tinkering Tuesday enhanced the practical ability of students in the field of science using the technique ‘learning by doing’, where students performed various fun-filled science activities.
On Funday Friday, students developed their creativity in Art and Craft, trying out some fun and interesting activities.
Story Sunday fired the imagination and taught the children through moral stories. It also refined the speaking and listening skills of the students, making them more confident in their communication.
Around 250 students took part in this camp. The students uploaded the pictures and videos of their activities regularly in the LEAD app. Each student received a Certificate of Participation at the end of the programme. There were lucky winners declared on a daily basis from amongst the nationwide participants under the Lead curriculum. This Summer Camp has been a good source of entertainment as well as learning. 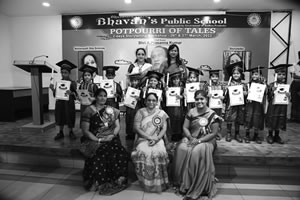 Bhavan’s Public School organised an impressive function to celebrate the graduation ceremony of UKG students on March 27, 2022.
On this occasion Smt. M. Sita Srinivas, storyteller, voice performer and voice artiste, Smt. Sree Karuna, certified storyteller and NLP practitioner and Principal and Smt. Shimpy Kumari felicitated the students, who were clad in graduation robes and awarded them certificates. They congratulated the parents
and students.
The toddlers were very excited to receive their passing out certificate from Kindergarten to Grade 1. 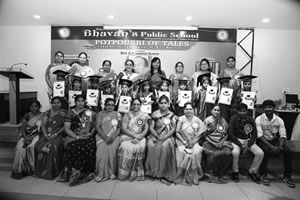 The school organised a joint workshop for parents and students on ways to enhance their storytelling skills and inculcate a love for reading books and reading habits among children.
The parents thanked the school for a beautiful day well-spent with their children in the most creative and fun-filled way.

The students and staff of Bhavan's Public School, celebrated Children's Day with great enthusiasm and gaiety. An array of exciting events like snow bowling, hopping race, hurdle race, memory games and trespassing cones were conducted. The highlights of the special day was the fashion show, the winners of which were awarded with the title of Mr and Ms Bhavan's. All the winners received medals and certificates. 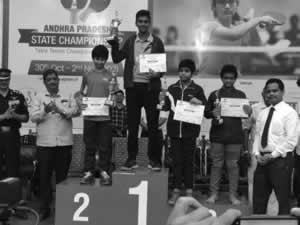 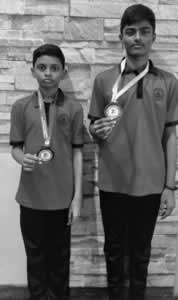