The Bhavan’s Chennai Kendra was established in 1958 with the blessings of Paramacharya, His Holiness Sri Chandrasekharendra Saraswathi Swamigal of Kanchi Kamakoti Peetam.
The activities of the Kendra are conducted in three different places in the city :
(1) Mylapore – Main Kendra Complex
(2) Kilpauk - Bhavan’sRajajiVidyashram, a CBSE Senior Secondary School
(3) T.Nagar Sub-Centre

PAST CHAIRMEN OF CHENNAI KENDRA 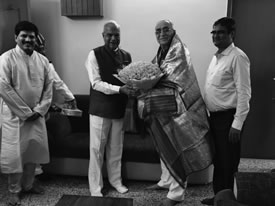 The Bhavan's Vice-President and Governor of Tamil Nadu Shri Banwarilal Purohit greeted the Kendra Director Shri K. N. Ramaswamy on the occasion of his 80th birthday.

Sri K. N. Ramaswamy, Director, Bhavan's Chennai Kendra, was bestowed with the prestigious 'Kalaimamani' title by the Government of Tamilnadu on February 20, 2021, for promoting Art and Culture by Thiru. Edapaddy K. Palanisami, the Hon'ble Chief Minister of Tamil Nadu, at a function held at St. George Fort (Tamilnadu Govt. Secretariat) in the presence of Thiru. O. Paneerselvam, Dy. Chief Minister of Tamilnadu. Many other Ministers and senior officials were present on this occasion. The award carried a citation, a shawl and a gold medallion (40 grams of gold).
People from various walks of life congratulated Sri Ramaswamy on receiving Tamilnadu's most prestigious award and this included the Bhavan's President Shri Surendralal G. Mehta, Thiru Banwarilal Purohit, Hon. Governor of Tamilnadu and Vice-President, Bharatiya Vidya Bhavan (World-wide), Sri K. Parasaran, Sri M. K. Narayanan (IAS ), Sri N. Murali and Sri N. Ravi of The Hindu and many others. The Award Ceremony was telecast in various television channels and was covered widely in the Print Media.
Sri K. N. Ramaswamy dedicated the award to the Bhavan. 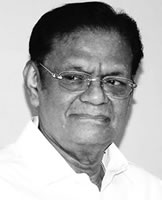 We regret to inform you about the sad demise of Shri L Sabaretnam, Former Chairman, Chennai Kendra on April 25, 2021. He was 81.
A Patron of Bhavan's Chennai Kendra since the last two years, Sri Sabaretnam was a very dedicated person and has served as the Chairman of the Kendra and as a committee member for 25 years.
Sri Sabaretnam was also the Director and Chairman of Chennai Super Kings (CSK) team.
He is survived by his two sons and two daughters.
Bhavan's offers its condolences to the bereaved family. May his soul rest in eternal peace. 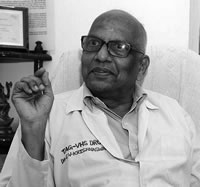 Dr. C. V. Krishnaswami, the eminent diabetologist passed away on May 21, 2021. He was 83.
Dr. Krishnaswami has been associated with the Chennai Kendra as the Kendra Committee member for the last 25 years.
A pioneer in his field, he was very attached to children and was instrumental in setting up India's first juvenile diabetes registry.
"He was an extraordinary human being first and a physician par excellence. He had won the hearts of thousands of families who relied on him not just as a doctor but also as a friend," said Ramesh Chandrasekaran, his son-in-law, who is a senior consultant, physician and diabetologist at Prema's Medical and Diabetes Research Centre (PMDRC) of which Dr Krishnaswami was the Director.
Dr. Krishnaswami's friends and colleagues at VHS Hospital where he served for more than 50 years remember him for his yeoman service, humble personality and as a superb orator and 'walking encyclopaedia'.
He is survived by his two daughters and their families. May his soul attain eternal peace. 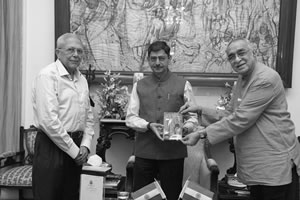