The Coimbatore Kendra was founded in the year 1964 by Late Shri G.K.Sundaram, Chairman, Lakshmi Mills Company Ltd., for promoting art, culture, literature, and moral and ethical values in the industrial city. Dr. B.K.Krishnaraj Vanavarayar has been the Chairman of the Kendra since 1990. Under his tutelage, the Kendra has further blossomed carrying out a number of activities and programmes. 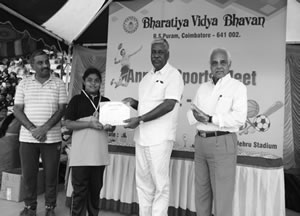 The Annual Sports Day was held at Nehru Stadium on July 29, 2022. The students took part in shot put, long jump, 100 and 75 m dash, sack race, balloon bursting, needle and thread, stringing beads etc. The whole day was buzzing with events and the stadium was full of students in their colourful attire.
The event concluded with the prize distribution ceremony by the Chief Guest, Jt. Secretary Shri Suryanarayanan. 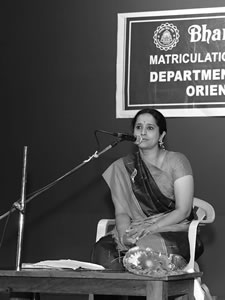 The Human Excellence session for the higher secondary students of both the schools was held at BVB RS Puram on June 25, 2022. The speaker of the day was Smt. Vishakha Hari (Hari Katha Exponent). The Registrar Shri. Prabhakar Rao V and the Joint Secretary, Shri. Suriyanarayanan graced the occasion.
The speaker underlined the various discoveries and innovations done by our nation since ancient times and highlighted how Indians have been the torch-bearers in all the fields. She kindled the feelings of gratitude and belonging among the children towards their own nation.

The Annual Awards Distribution function to honour the toppers of the Board Examinations was held on July 6, 2022 at BVB, RS Puram. The delegation included the Chairman, Shri. B. K. Krishnaraj Vanavarayar, the Correspondent Shri. Alagirisamy M, the Joint Secretary Shri. Suriyanarayanan, the Registrar Shri. V. Prabhakar Rao and the Principal Shri. R.G Shankar.
The Management honoured the teachers with the certificates and a cash award for their hard work. Subsequently, the awards were presented to the top rank holders of Class 10 and 12 and the subject toppers. 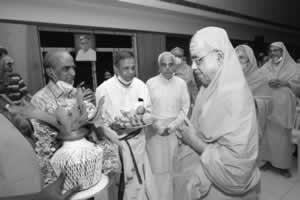 During the last week of April, Pujyasri Swami Paramarthananda delivered a series of lectures, over seven days, in Bharatiya Vidya Bhavan, Coimbatore, on the subject of Uddhava Gita. It was actually a continuation of the lecture series begun a few years ago.
Uddhava Gita is the very final teaching of Lord Krishna before He gave up His worldly body and went back to His abode. It is a teaching conveyed to Uddhava, who was a close friend and a strong devotee of Lord Krishna. This Uddhava Gita shows many similarities to Bhagavad Gita which was a teaching from Lord Krishna to his good friend and cousin, Arjuna. Swamiji pointed out these key aspects of Uddhava Gita and then did a recap of the first few chapters of Uddhava Gita (already covered in the previous years before Covid). He then picked up the thread from the fifth chapter. Undoubtedly the attendees felt lifted up to a highly philosophical and serene plane throughout these lectures. Such was the power of the subject and the spiritual radiance of Swamiji. 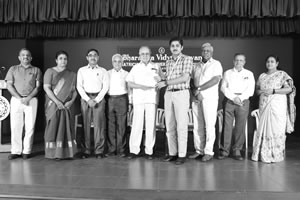 The Annual Day Awards function of both the schools of Coimbatore Kendra was held on April 18, 2022 at BVB, R.S. Puram School. The delegates included the Chairman Shri. B. K. Krishnaraj Vanavarayar, the Treasurer Shri. M. Alagiri Swamy, the Registrar Shri. V. Prabhakar Rao, the Joint Secretary Shri. C. R. Suriyanarayanan, and the Principals Shri. R. G. Shankar and Smt. D. Maheswari.
The programme commenced with a prayer by the school choir. The welcome address was delivered by the Principal of R.S. Puram School, Shri. R. G. Shankar. The students of Class XII shared their wonderful experience of studying in the school. They also emphasised the importance of character building.
Chairman Shri. B. K. Krishnaraj Vanavarayar delivered the Presidential address. Then, the C Subramanian Award, Shri Pranlal Nanjee Devkaran Award, SPL, ASPL, JSPL, Sports Captain, All Rounder Award and Swami Vivekananda Award for Excellence were presented. The recipients were applauded by the audience for their leadership skills, dedication and diligence.