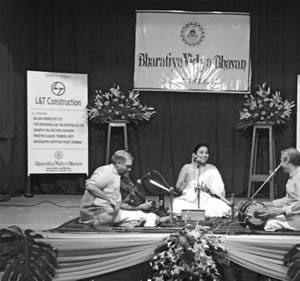 The Kendra was able to revive its annual summer festival of music after a gap of two years. Ms. Aishwarya Vidhya Raghunath presented a classical Carnatic music concert on June 11, 2022. This was followed by a violin concert on June 12 by Sri R. K. Shriramkumar, accompanied by Sri K. Arun Prakash on the mridangam, two of the foremost artistes in Carnatic music today. Both concerts were very well-attended and greatly appreciated. 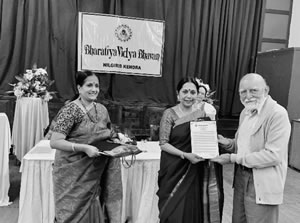 The Nilgiris Kendra conferred the Kulapati Munshi Award on Radhika Shastry, a citizen of Coonoor.
During the COVID pandemic, she turned her energies towards improving the healthcare infrastructure in the district. With the wholehearted support of her café patrons and local residents she took the initiative to distribute 40 oxygen concentrators to various medical centres in the district. She helped set up an oxygen plant in Govt. Lawley hospital, Coonoor with ACT grant. She sourced six AmbuRX ambulances customised to suit the terrain of the district. These are deployed in various hospitals at Coonoor, Ketti and Kotagiri. She spearheaded the construction of a completely new casualty ward, ICU and the first-ever paediatric ward at Govt. Lawley Hospital, Coonoor. She also promoted a vaccination drive with 2000 vaccines being provided free of charge, sponsored by Caterpillar through United Way, Chennai.
A moment of great pride was when Prime Minister Shri. Narendra Modi, praised her in his programme, Mann Ki Baat, recognising her invaluable contribution.
At the ceremony conducted at the Coonoor Club, the award was conferred on Ms. Shastry by Dr. M. R. Srinivasan, Chairman Emeritus of Bharatiya Vidya Bhavan, Nilgiris Kendra. In her acceptance speech, she commended the support given by her team and that of the doctors from Lawley Hospital, as also the patrons of her niche eatery, Cafe Diem. She also emphasised the need for public participation to ensure the betterment of the district. 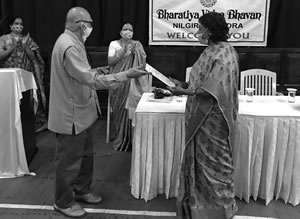 The Nilgiris Kendra of the Bharatiya Vidya Bhavan conferred the Kulapati Munshi Award for 2021 on Ms Susan Daniel in recognition of her contributions to literature and her social work for the underprivileged. Dr M. R. Srinivasan, Chairman of the Kendra presented the award to Ms. Susan Daniel on 10 March 2021.
Ms. Susan Daniel lives in Ooty and is a writer, an award-winning translator, educationist and social activist. She translated the Kannada novel 'Kusumabale' by the noted author Devanuru Mahadeva into English which was awarded the Sahitya Academy award in Translation 2019 / Category English.