Bhavan’s Delhi Kendra began its life in 1952 when Dr Rajendra Prasad laid its foundation stone. Shri Jawaharlal Nehru formally inaugurated the Kendra in 1957. New wings were added in 1976, 1982, 1998 and 2012. The Kendra is now housed in a complex of spacious buildings in a Central locality in New Delhi on the Kasturba Gandhi Marg. Its campus covers an area of 6.84 acres of land. The Delhi Kendra today is the house of a number of Departments and Institutions catering to the educational, cultural and moral needs of children and adults alike. In view of its location, ‘The Delhi Kendra’ is called upon to liaise, coordinate and follow- up matters concerning the Central Office and others, including the foreign Centres of the Bhavan, with the Central Government, Non Government Institutions and Eminent Personalities. Today Bhavan’s Delhi Kendra is most trusted organization in India for promotion of “Sanskrit and Sanskriti”
As one of the activities to promote Bhavan’s Mission (Sanskrit & Sanskriti) and objectives, Bhavan’s Delhi Kendra organizes various events throughout the year in pursuance of the Bhavan’s objectives. Some notable ones are:- Bhavan’s Sangeet Samaroh, Malhar Utsav — an evening of Hindustani Vocal Music, Book Release, Seminars/ Workshops Kavi Sammelan on Hindi Divas, Inter-School Competition on the recitation of Bhajans —dear to Mahatma Gandhi, Inter-School Sanskrit Shloka Competition and Inter-College Upanishad Paath Competition; Gita Jayanti, Birth Celebrations of Dr K.M. Munshi, Vasant Panchami Vasantotsav and many more.
Conceptualized by Shri Ashok Pradhan, Director, Delhi Kendra, every year Bharaitya Vidya Bhavan, Delhi Kendra, to celebrate its foundation day and to pay tribute to its Founder, Kulapati K. M. Munshi, that has been organized from 2009, Bhavan’s Sangeet Samaroh, in which eminent artists from Hindustani, Carnatic-vocal music, classical dance forms and instrumental music are presented to a distinguished gathering at Kamani Auditorium, New Delhi, usually on 6th, 7th & 8th November. On this occasion, Bhavan also brings out a thematic digest to create awareness about our ancient texts, related to the performing arts. So far, the Bhavan has brought out digests on the themes such as - Our Heritage in Classical Music and Dance,Instruments in Classical Music, Dance Traditions in India, Abhinavagupta, Silappaatikaram, Brahaddesi, Sarangadeva’s Sangeet Ratnakar, Chaturaa Damodara Virtictama – Sangitadarpanam, Pandit Aahobal’s “Sangeet Parijat” and Mansollasa

“India is recognized for its rich cultural heritage, and every Indian must get connected to the values of Indian knowledge. Bharatiya Vidya Bhavan’s motto is “आ नो भद्राः क्रतवो यन्तु विश्वतः।।” that means ‘Let noble thoughts come to us from every side’. This is being practised at every stage of educational training. So, our educational process includes several activities that promote value addition at every stage of life. At Bharatiya Vidya Bhavan, a child of 3 years can join the Nursery class of Mehta Vidyalaya that is a CBSE recognized school up to 12th grade.For those who are stepping out of school, Bhavan has several professional job oriented courses in the field of Management, Education, Communication and many other trades, where students are professionally trained to become Industry ready, to get jobs easily, at the same time they are trained with value-based education to become good human beings. And when a person is ready to play the second inning of his/her life(means after retirement from job), Bhavan offers plenty of training programmes in Yoga, Astrology, Ayurveda, Vassstu and many similar subjects. We have many students of age 60+ enrolled in these courses. By joining such courses, one truly gets connected with divinity to observe perfect spiritual growth. It is said that ‘Education of Human being should begin at birth and continue throughout his life” and Bharatiya Vidya Bhavan truly offers “Vidya” at every stage of your life. Best.” 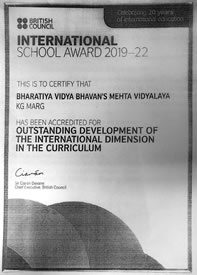 The British Council recognised Bhavan's Mehta Vidyalaya's contribution for its outstanding development of the international dimension in the curriculum and honoured it with 'International School Award 2019-22'. 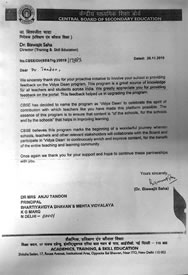 Bhavan's Mehta Vidyalaya received a letter of appreciation from the CBSE informing that the pilot programme 'Vidya Daan' initiated by the school has been adopted by CBSE and will be implemented in all schools across India.

Bharatiya Vidya Bhavan's Mehta Vidyalaya bid adieu to the outgoing batch of Class XII on February 7, 2020. The Chief Guest for the evening was Prof. Siddharth Ramji, Director- Professor of Department of Pediatrics & Neonatology, Maulana Azad Medical College, New Delhi and a former alumnus of batch 1973. The occasion also saw the release of the Bi-annual School Newsletter. 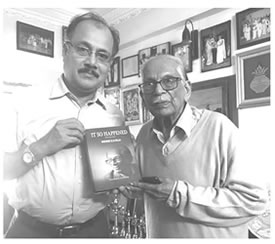 After 30 years of glorious service as Principal of Sardar Patel College of Communication and Management and as Hon' Director of Rajendra Prasad Institute of Communication and Management, New Delhi, Shri Omcherry NN Pillai stepped down from his responsibilities. He is now 94 and believes that the most productive chapter of his life has started now only.
On this occasion, his memoirs, 'It so Happened', was released by PI Sherief Mohammed, Hon' Secretary, Pathanamthitta Kendra. His memoirs covered in 40 chapters are a great work of art and literature, and is an inspirational guide for all.
Bhavan applauds VP Joy IAS Cabinet Secretary Govt. of India and Sri Radhakrishnan Iyroor for their contribution in bringing out the Memoirs. 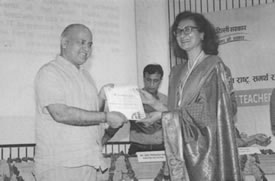 Dr. Anju Tandon, Principal, Bharatiya Vidya Bhavan's Mehta Vidyalaya, New Delhi was honoured with the State Teachers' Award by Shri Manish Sisodia at the Delhi Secretariat on 26 March, 2021 in a grand ceremony. This award was bestowed on her in recognition of her path breaking efforts, invaluable service and contribution in the field of education. The award constituted a cash prize of Rs 25000/-, a citation, a silver medal and a shawl.
Dr. Anju is also a recipient of the coveted 'CBSE National Award for the Teachers for the year 2014' in recognition of her valuable and commendable services rendered to the community for the cause of education as a teacher of outstanding merit and Commendation Card from General Officer Commanding-in-Chief Central Command on the Eve of Independence Day 2007 in recognition of devotion of duty and distinguished service.
Dr. Anju Tandon has been the epitome of excellence as an educator, a leader and a mentor. Spearheaded by her dynamic leadership, Mehta Vidyalaya has emerged as an institution that focuses on investing in the future of children through a vast spectrum of initiatives, programmes, events and activities designed to inculcate in them the 21', century skills and values.